A: Why is it the first letter?

I must confess, it took me a great deal of thought to decide what topic I should chose for my first ever A-Z challenge participation. Thanking Arlee Bird for initiating the A-Z Challenge four years ago. It's a challenge of sorts and has our brains working!

I started writing about my profession Advertising at first - Ad Mad World. But then, I reached the fifth paragraph only to realise that I might go on and on and then no one will visit my blog again and again ;)

So, I did you a favour (alright, it was for me actually!). I have kept it in Drafts and will touch it when I am completely lost for topics.


I was then thinking why is "A" the first letter? Maybe because my name starts with A - Anuradha. But then you will not agree. So I Googled around. 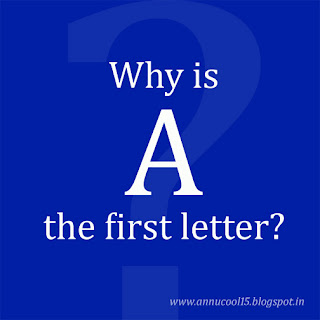 "A" is derived from the Ancient Greek letter Alpha. Well, some of us know this. But why the first letter?

So I researched and found the following reason on Wikipedia:
Alphabets often come to be associated with a standard ordering of their letters, which can then be used for purposes of collation – namely for the listing of words and other items in what is called alphabetical order.

The basic ordering of the Latin alphabet (ABCDEFGHIJKLMNOPQRSTUVWXYZ), which is derived from the Northwest Semitic "Abgad" order, is well established.

Too technical and not the perfect answer yet? I agree!

Finally I found this information that makes some sense: The alphabet came from the 'A´lef-Beyhth, the alphabet divised by ancient semites where first letter was A´lef the father our letter A!

Damn, the reasons are aplenty and none seems to be the perfect. No wonder "A" is called the indefinite article!

So since this particular post is becoming too educative (or boring?), let me use my own creativity here.

Why is A the first letter of the alphabet? And why not?
The reasons are one/all of the following:
I will leave it at this for now. Will keep filling in my ideas about it later on. Until then, I am trying to find out Why 1 is the first number? That sounds easy. But so did "A" when I started looking for it today!

See you blogging around and I hope you would visit again. After all, my blog starts with "A": As I look at Life!

PS: Just realised, may be "Alpha-betical order" is called so because Alpha-Beta... you get it, right?