There have been so many incidents in my life where I felt like whacking someone. But then, I did not. Education and civic sense does that to you… damn the mannerisms! At the most, I end up calling up my friends and sharing the incidents with them. We discuss and debate and that is almost the end of it. Almost… because the memories occupy an un-deletable space in your mind!

Now thanks to Blogadda’s Whack this Wednesday contest (click on the links to know more about the contest), I ponder over those incidents and am ‘virtual’ly whacking those I couldn’t. 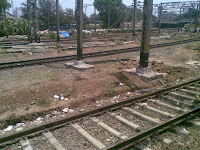 Train Mein Kachre-waali: This seemingly educated female took a window seat (you’ll know why) in the least crowded Vashi-Thane local train that was to depart in a few minutes. She removed a wrapper from her purse and shamelessly dropped it out of the window. I really had a bad day, so for the first time I controlled myself from stopping someone. Then the train left, she finished eating some chips and off went the wrapper. Now I was furious but kept quiet again. I never do that. I kept staring the female so that she feels guilty! And then she littered again!!! I asked her to stop doing so. Can you believe she said what’s wrong since she threw the kachra after the train left the platform! She started arguing and asked me to mind my own business. That was it! I gave her a good lecture but she didn’t care. She said she’ll litter all the more and I have no right to stop her… damn I so felt like slapping her as I stupidly asked her if she littered the same way in her house and she said YES!!!

Haath Ki Safaai: Recently, there was a car and bike accident just in front of my building. The person driving the car did not hit and run, but stopped it a few feet away. He clearly felt guilty and wanted to help the biker who was lying on the road, perhaps unconscious. But within a few seconds crowd gathered. The car driver tried to come out of his car twice, but the crowd looked furious and he stayed inside. Instead of rushing the victim to the hospital immediately, people approached the car driver who appeared to be pleading but then one person slapped him hard and you know what Haath Ki Safaai follows in such situations. I so felt like going downstairs and whacking the crowd. I did do what I could in my capacity. But why don't people simply call up the police if they really care? Or allow the person to take the victim to the hospital if he wants to?

Stubborn Rickshaw Driver: I had a super hectic day and reached Goregaon station around 9 pm with lots of heavy baggage. As always, rickshaw drivers kept refusing to go to Bangur Nagar. I was feeling very giddy and eventually sat in a rickshaw even when he refused... he wanted a very long-distance passenger. I told him that he has no right to refuse and he must at least consider that I am feeling very sick. The argument gained momentum; I lost it and refused to get off. The stubborn rickshaw driver said he won’t move and I can stay for as long as I wish. Damn he did not move at all for long! I had to step out in tears, feeling miserable and cursing him.

Some Aunty: My dear granny passed away a few years back after prolonged illness. It was that time when we all sat around her just before she was supposed to be taken away. And then, I heard some aunty seated behind me asking someone “Annu ke liye koi ladka dekha?” “Iski shaadi kab kara rahe ho?” I did not see who she was, I did not want to. Definitely she was someone elderly… but hello… I just lost someone very dear and was she there to mourn or to indulge in some marriage celebrations? Grrr…

Kaatil Kasab: I feel like whacking him for obvious reasons. More so, I want to whack the cruel masterminds whoever and wherever they are.
Posted by annucool15