My blogger friend Mr. Deepak Amembal tours a lot and shares the pictures with us. From dosas to goola bajay, from people to Gods. As he travels, we get to see the different aspects, specialities and cultures of different places. And today, he shared the picture of the bull who wears his heart on his forehead at Annual Shashti Celebrations. 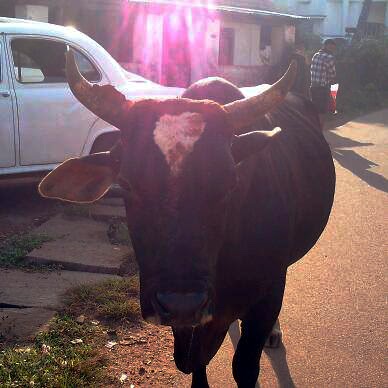 The bull with the heart and a pink light at the background inspired me to imagine what his story could be. And so here it is:

He was shy that way. He tried to indicate he liked her, but she never understood. He appeared a bit rude, she thought he has no feelings. He continued to be a shy-bull while a macho-bull wooed her away.He finally shed his inhibitions and now he wears his heart on his head. Though it hasn't helped him, as now he appears too soft and the other bulls bully him. But he knows someday he will find a cow with a heart... but how???

And yes, I did look up for a cow with a heart and guess I found him a compassionate match. What's say?