Nothing beats the fun of celebrating Holi in your building! 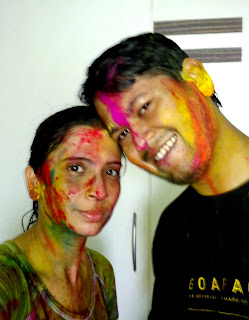 As kids, on the day of Holi, we used to hit the building terrace in the morning. Some drew water from the tanks and mix colours in buckets while others blocked the water exits on the terrace to create a little rangeela pond! After getting completely drenched and unrecognizable with all sorts of colours all over us, we would sit together for a session of Holi songs. Aah the Rang barse beegey chunarwaali and Holi ke din dil khil jaate hain...


Those were the days when playing with water balloons was not considered wrong. I and my brother would target the pedestrians from our house at the fourth floor and hide before they noticed us. But we were pretty sabhya at that time as well. We would not aim water balloons at:

During our degree college days, for some reason the terrace was permanently locked and Holi masti stopped. And then for a few years Holi just meant a holiday with sweets and applying gulaal to family members and neighbours.

It was in the year 2009 that I played Holi with all the colours and water again. It was my first Holi after marriage and it was so much fun enjoying the festival with the neighbours from my new residence! I never thought the masti-Holi times would return again!

Today, we had a mega celebration at our building. Almost every resident turned up in the premises in the morning. There was an unlimited supply of colours (non-toxic, natural ones) and some buckets that did the magic. There's nothing like playing Holi with kids... doesn't it bring out the child in us? Team it with delicious pav bhaji, pulav and jalebi, and the get-together we await for months together! Can't thank the organisers enough!

We are lucky to have so many festivals, they bring us all together and make us smile and forget all routine for a while, isn't it?