Justice is blind, but is it deaf too?

Every single time there is any news about a rape, every woman is enraged. Over the months, with so many terrible incidents reported almost everyday in the newspaper, the anger, the sorrow and the feeling of being unsafe only builds up. And it comes to a point when some of us, including me, feel so terrified that we start having nightmares... that we stop reading the entire news about rapes... because it leaves us disturbed... very disturbed. 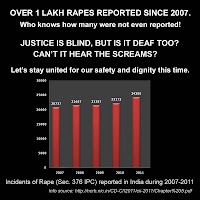 This happens to us when we read about a certain rape tragedy with someone we didn't even know. Try imagining the plight of the person actually going through the trauma! No, we can never imagine.

Remember how bad you feel when someone at a crowded railway station touches you inappropriately and disappears in the crowd? As if we are some public property!!! Even thinking about what we will do if someone tries to rape us is super scary. Even if the thought comes to our mind, we immediately switch off. We think, we are unnecessarily worrying, it won't happen to us. But deep within we are concerned:

Rape is the worst thing to happen. It is a shame it is still happening in a nation we call independent. It's hell brought down on earth. And the demons and potential demons are roaming around freely! And sometimes, someone around comes to help. But these days, even the Good Samaritan is 'punished'. In a country where there are so many Goddesses one can't even count, a woman feels unsafe. This is after India has celebrated 65 years of independence! When will Indian women celebrate independence?

I looked up for some facts wondering really how far we have reached in being light and careless with such cases. I was wondering if the number of rapes has increased this year in particular, is something really going bad with the system / education / laws? Or has it always been like this but only this time it is so much in the news?


I have read the table over and over again but I still cannot believe the numbers. So please check this link and tell me if I am wrong. I hope you tell me I am wrong.

And if I am not, please don't let the voice come down this once. Please don't give up the demand for severe laws against such creatures. There has to be a severe punishment for such inhumane behaviour. The punishment and the term should set an example that no one ever dares to think about molesting / raping anyone.

Hoping the laws are made stringent where they should be. Hoping the common man and woman is assured increased safety the way we are assured of increased fares, expenses and taxes.
Posted by annucool15